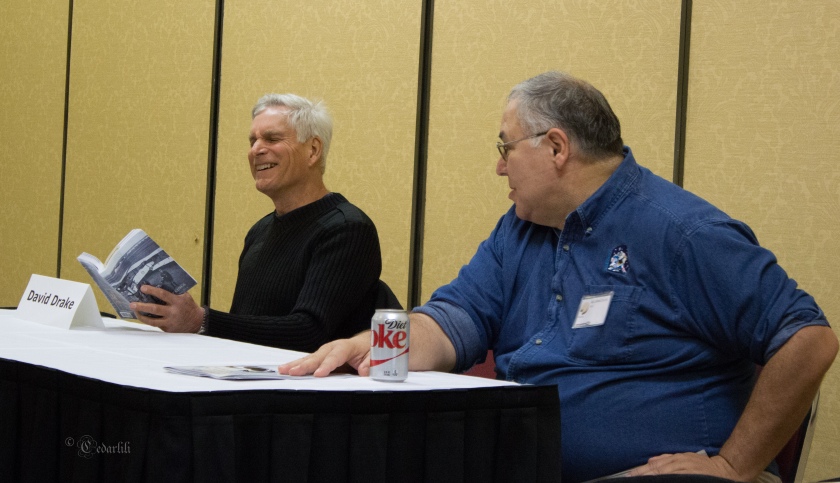 I attended a panel last weekend at Millennicon. It was the only panel I made the time to attend that I wasn’t sitting on, partly because there were few panels that interested me, and partly due to my busy schedule.

The panelists were David Drake, Christopher Stasheff, David Burkhead, Mark Haynes, and Dave Creek. I only jotted a few notes during the panel, but there were some interesting thoughts that I will use to springboard into my take on this. In the comments, I fully expect to hear from you all that you disagree, and why. Or not.

Drake started it off with his definition of Hard SF. First of all, he said, I don’t write hard science fiction, and I don’t read it for enjoyment. I consider what I write to be adventure science fiction, he told the audience. But if he had to define Hard SF, it would be: science fiction written by engineers, not scientists. The First Reader and I talked about this later. In his day job, he works with both. An engineer, he pointed out to me, will build by rule of thumb, It just needs to work. A scientist wants to know why it works, and can get hung up on some odd quirk of the machine rather than just accepting it works and moving on to what comes next.

So Hard SF ought to be practical, the ‘what really happens’, and focused on technology, then?  I know that I have always thought that Hard SF wasn’t so much about the people, although they are in a good story, but about the science, and the consequences.

Christopher Stasheff told the audience that he has always ascribed to Asimov’s three rules – no, not the ones about hurting humans – which partition Science Fiction into:

Stasheff added that he also likes Norman Spinrad’s question, “who does this hurt?”

Indeed, given those questions and applying one or more to any aspect of technology could quickly generate some very interesting fiction, and some of it would most likely be Hard SF. But as Stasheff went on, he never wrote much Hard SF, as he had “a few questions I want asked, some to do with human beings rather than their gadgets.”

David Burkhead, whose career is in atomic force microscopy, once in itself considered rather science fictional, pointed out that “people like me got into science because we read science fiction.” For him, the hard science was not always constrained to what we know now to be possible, but what might come in times ahead. A hundred years ago, science flatly proclaimed impossible matters that are now daily feats.

So far, we have established at least a nebulous idea of what hard science fiction may be. And we touched on the relevance, with Burkhead’s inspiration of the next generation of scientists. Indeed, as one audience member held up their cell phone and pointed out that it was a Star Trek communicator, we do use science fiction made fact every day.

Why, then, does it seem that we need to question the relevance of Hard SF? Why is it more difficult to name a title published in the last year or two that was not only ‘hard’ but compelling storytelling? When an audience member asked this question, and the panel was stumped, I could only think of one, off the top of my head, which I enthusiastically recommended. Andy Weir’s The Martian which came out about 2 years ago is not a typical novel in format, but still a good story, and diamond-hard SF. I also recommended that she take a look at Baen’s catalog. David Drake told her about the short-story contest he has helped judge for the last three years, the Jim Baen Memorial Short Story Award. How can you go wrong with entry requirements like this?

So what do you think? Is Hard SF still relevant?

Off topic entirely: if you’re looking for some fresh Fantasy Noir, my sixth novel, the finale of the Pixie for Hire trilogy, was released today. Dragon Noir was born of reading far too much Spillane, Chandler, and Hammett and then letting my twisted sense of humor loose.

“The pixie with the gun has come home to see his princess crowned a queen and live in peace. But nothing is never easy for Lom. A gruesome discovery on his doorstep interrupts their plans and sends Lom off on a mission to save not one, but two worlds. It’s personal this time and the stakes are higher than ever before. With friends falling and the enemy gathering, Bella and Lom must conquer the worst fears and monsters Underhill can conjure. Failure is not on the agenda.”