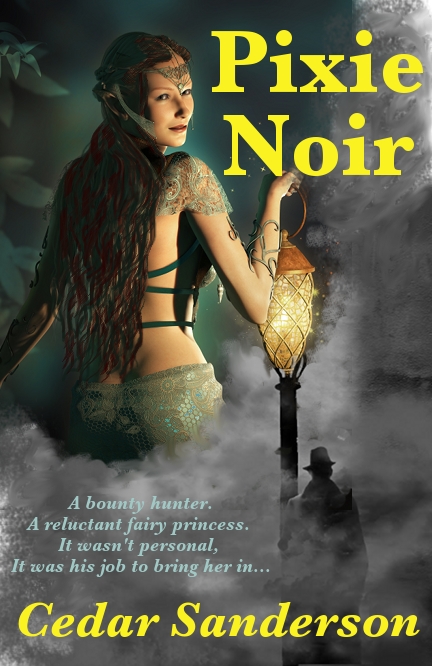 I started out to write a little story to make my partner laugh. I didn’t start out to write something special, or anything other than fun, but I wound up with a novel, and then realized it’s a series, and… Pixie Noir started out of having a direction, and then it just grew.

We’d been having one of our rambling conversations about books, authors we like, and guilty pleasure reads. He admitted to a fondness for Mickey Spillane, but not the Hammer books. I don’t remember what sparked the desire to make him laugh, but I emailed him what would become the first scenes of Pixie Noir one day. He liked it so much I kept expanding it, and sending him snippets as I wrote. He’d give me suggestions (and earned the sobriquet Evil Muse during the six months I was writing this book) and help me with things like male-to-male dialogue. Turns out guys don’t talk to one another like girls think they do. Which makes sense, but… well, I’m a girl.

I write most of my stories because I have to write. Like an itch, they get in my head and nag me until I let them out on paper. Pixie Noir had this loud, brash, sardonic character who kept talking to me. I didn’t plan the story out much, I’m a pantser. I certainly did not plan out my characters, they were in my head as clearly as real people. I read an article the other day about how to develop a character and had to stop and go ‘huh’ as I have never had to do that. I do know that there are things I could not ask or force Lom to do – back down from a fight, open up even to Bella – because they are not in his nature. And Bella, who very practically decides that if she is no longer safe on Earth, why not take a job with the most dangerous man Underhill, if that’s what she wants?

I did set out to write romance into Pixie Noir, but I didn’t want to make it “a romance,” nor did I want them hopping into bed casually. It’s not that I can’t write sex, it’s that these two people, however fictional, had their own agendas and feelings, and I the author had to respect that. About the only things I could dictate were weaponry, like the multiple grenade launcher for Bella’s confrontation with Ogres, and her reaction was something like “ooh! Give me that.”

Much of the bit and pieces fell into place while I was talking with my Evil Muse, like the joke about in case of stairs, use fire. Some of it came out of deliberate research, as my marinating my brain in noir fiction, reading Spillane, L’Amour’s detective tales, and even Ian Fleming. When I needed just the right weapon for a short pixie and slender woman to use on Ogres when they couldn’t use much magic, I went to the Monster Hunter International group and asked the gun geeks, who had more fun than I could have imagined with that scenario! I’m grateful to Everitt Mickey for his technical assistance in the best way to use a logging truck to go bowling for Ogres.

Writing is not a solo concern. Everything I have ever read goes into the meatgrinder of my brain, spiced with research and a touch of craft, and what comes out is mighty tasty. Then, there’s the packaging, because while sausage might be delicious, no one wants to know how it’s made. I have found, personally, that I need to avoid reading modern in-genre fiction while I’m writing, because it affects my writing. I can, and will, read all sorts of other books, but I need some distance between me and the last urban fantasy I’ve read before writing Trickster Noir, for instance, just as I avoided reading any while I was writing Pixie. On the other hand, I have found that it’s terrific fun to have conversations about my characters as though they were real people. And anyone eavesdropping on us avidly plotting out Bella’s entrance to Court and conquest of Underhill by way of setting it (literally) on fire must have thought us quite mad. I hasten to assure you, by the way, that it was only a little fire, and there were extenuating circumstances on Bella’s part.

Writing doesn’t have to be hard work. Yes, it’s not easy, but the paradox is that the more fun you have with it, the more fun your reader will have, too. I started reading Ross MacDonald’s The Moving Target, to marinade my brain for Trickster Noir, the sequel to Pixie, and came across a great quote in the introduction. The novelist James M. Cain wrote, “to me, writing is the scrim through which the reader sees the story. If the writing is too fancy, or has patterns in it, there’s a conflict in the scrim. It disturbs the reader and he doesn’t see the story clearly.” When I sit down to write, I want to tell a story. Or rather, to dictate the story my characters are telling me. I hope you enjoy it, straightforward, shoot-from-the-hip as Lom is.

And where do you find this story? It’s available through Amazon, in print and ebook (DRM free, of course!). If you buy a print copy for signing, the ebook is available at a deep discount through the new MatchBook program.

Click on the little image above to buy, or try this link: Pixie Noir