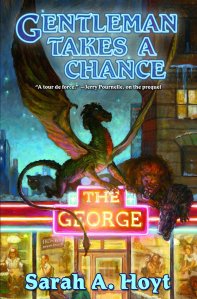 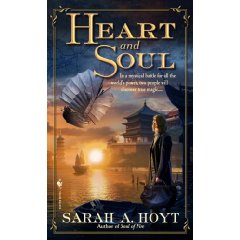 I’ve been re-doing the second part of an overdue book for the last month and learning a lot in the process.
I finished it once sometime in December, and then found myself staring at it and going “That’s just wrong.” So I’ve been trying to fix it. I just finished the run through on pinning the action today, and I realized both what was wrong and what I learned in writing it.
It’s not that I don’t normally write action. I don’t think there’s anything in particular I’ve never tried. At least not anything I’m conscious of avoiding or not writing. (I’ve even written erotica. In fact it was my highest ever paid short story. Eighteen hundred dollars for six thousand words. Unfortunately the magazine – Heat – went under shortly after and the story never came out. I still got the money, though.)
It’s more that my action tends to be wrapped around characters who – frankly – are so prone to getting lost in their own minds that they submerge the action in a bunch of introspection and personal discovery. This is one of those problems that are a reflection of how the author works, I guess.
However, the second half of this book – DarkShip Thieves, coming out from Baen sometime next year – is non stop action with brief punctuation of thought. Part of this is the character’s personality. Athena is the sort of character who wakes up naked, strapped down, tied to medical machineries, and yet has her pursuers surrounded, and it doesn’t matter how many of them there are.
One of the challenges of writing that much non stop action is that, of course, the charm of the character – or part of it – are the unexpected, zany wins against all odds and using improbable means. On the other hand, if the character wins all the time, then it starts to get incredibly boring. (Which is what I had. Oh, it wasn’t that easy, but it because “oh, lets see how she defeats a hundred men with a shoestring and a jeweler’s loop NOW.) On the other hand, if you throw too many difficulties at her so that everything she does comes out wrong, the character starts wondering why he’s following such a sorry klutz.
I think I’ve finally managed to work it into a rolling up and down rhythm where first she has an improbable and spectacular win, then gets in deeper and deeper trouble for an unpredictable length of time, then another improbable win.
Overall I THINK I managed just the right rhythm to keep readers interested. Tomorrow and the day after I do a line by line go over, and we’ll see how it plays.