Still continuing my fascination for Saturn’s moon Titan this week. This time adding local power production to my sketch for the habitat.

But first a few other fun facts.

Using a variety of instruments aboard the Huygens probe scientists have been able to recount a by-by-blow of all 10 second of its bounce, wobble and slide across the surface of Titan.

At first contact the probe made a dent 12cm deep before bouncing onto Titan’s flat surface. They estimate the 200 kg probe hit the surface with the impact speed of a ball dropped from around waist height on Earth. Just think about that for moment – the effect of Titan’s reduced gravity. I find that awesome.

The analysis is so precise, scientists then report the probe tilted by 10 degrees, slid about a foot across the surface and came to its final resting place – where it wobbled back and forward four to five times. (Of course what they don’t realise is that a local Methanomorph – who had the sh*t scared out of him by the appearance of this strange object – kicked the Probe five times in sheer frustration.)

You can see an animation of the landing here.

Recent radar images from Cassini – orbiting Titan – reveal a circular feature described as a ‘hot cross bun’. This tasty region, which is 70km long, is characterised by surface fractures, with steam – possibly from rising magma below the surface, driving the uplift.

Having a think about where you would want to set up a habitat on Titan, I realised heat would be a premium. So you would set up either in a geologically active area like the ‘hot cross bun’ or perhaps near the mouth of an active volcano – just like the old Archvillain’s Lair!

OK, before you tell me I’m crazy, remember that things are very cold on Titan, around -179 C (-290F). The volcanic ‘lava’ is actually a liquid ammonia and water mixture. At the surface pressure of 1.45 atmospheres or 147 kPa (~21 psi) that means water is boiling at a slight elevation of 106C (~224F). [If you want to check out this boiling point elevation effect, find yourself a set of steam tables and look at the Saturated Water section.]

Perched up on the rim of the volcano, you would have a nice source of heat, and also a source of liquid water. Of course you would probably need to drive piles down to a nice solid foundation of ice or rock to keep your hab steady.

What you also have is a power Engineer’s dream – a temperature difference! Forget the portable nuclear reactor you brought to power things while you set up, now you can generate electricity directly from the ‘lava’.

You could operate a modified Rankine cycle using local materials for the working fluids. You would need to bring the key components with you (turbines etc), but you could use ammonia (R717) as the working fluid. Ammonia has a critical point at 132C. So you could fit a conventional cycle say between the temperatures of 106C and 10C – which would give you a theoretical cycle efficiency of around 25%. Not that great, but straightforward.

But what about using liquid methane as well? If you mixed liquid methane from the surface with the water ‘lava’ (50:50), you would end up with a methane-water-ammonia mixture with a temperature of around -79C. Now, because the ambient temperature is so low (-179C), you can theoretically operate a power cycle to recover heat right down to this temperature. The theoretical efficiency of recovering heat between 100C and -70C is 46%, much better. You could improve this by playing the proportions of the mix.

Of course you would have to do something tricky with the working fluid to allow this, perhaps by using a binary mixture of methane and ammonia.

You could pump the hot water from the volcano mouth, then generate power while you cooled the water using the ammonia cycle, then get even more power by mixing some of this water with methane. Rejecting heat from the working fluid would be a snap, given the low ambient temperature.

If you are interested,  here are the temperature Vs entropy diagrams for methane and ammonia. A typical steam-based Rankine cycle on a T-s diagram looks like this: 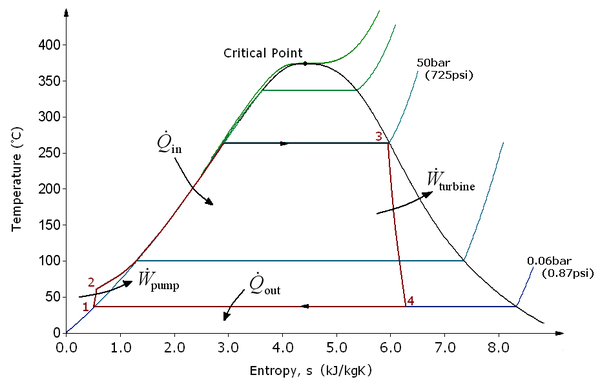 You would probably need to set up your Lair on the northern hemisphere of Titan, the only place where vast hydrocarbon seas have been observed.