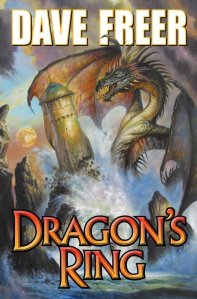 Well, the cover for Dragon’s Ring is up. I am very pleased with it. Covers are an issue that raise considerable heartache among authors. Contrary to what this deluded author believed, when he bravely ventured off into the unknown realms of publishing (here be monsters), it’s not actually a brave new world in there (except in the nastiest sense) where merit is all that really counts and the good writer will succeed. Firstly ‘good’ is a relative term – one man’s good is another’s rubbish, and it’s a big market place. If you can get the book to them there is demand for nearly anything you can imagine and some things that you’d rather not, like dwarf grand piano porn and Wuthering Werewolves. As ‘Success’ is another relative term, if you can get the book to all of those who dream of angsty emo werewolves, it’s a success. That’s why – for certain values of ‘success’ – authors writing for clearly defined niche markets, be they mil sf or gay and lesbian fantasy – have a slightly easier time being ‘succesful’. There is more active word of mouth linkage in any niche community – especially with the web, and, to be blunt, the people in that niche community probably are hungry for something that caters specifically to their interest, even if it is badly written. They’re not being bought for the writing, per se. One answer to the publishing ‘logjam’ is to target these niches. You can, if you have enough knowledge (or luck) target ‘mainstream’ (yes even sf and fantasy have a mainstream) editors with niches that interest them. Slow Train to Arcturus was shaped around that – we knew Jim Baen love the idea of space habitats.
But for most of us (and that is really 95% of the market, as, barring a few obsessives, even niche people do read out of it. Really :-)) are trying for success in the ‘I sold more than 100 000 hardcovers to a range of people’ sense, and that is about a whole bunch of factors over and above just good writing (for any value of good). One of these is obviously the cover. There’s a long list, blurb, distribution, adequate laydown, re-order, promotion, luck, reviews, a publisher that doesn’t abruptly pull the plug, and so on. As the author, with quite a lot of publishers (not all) your input stops with the actual writing. After that: the ball is out of your court, and you have to rely on the publisher to do it. Now, that actually really makes sense, as little as I like to admit it. As a writer you’re unlikely to be expert at all the others. In theory your publisher makes his money out of being good at them. Reality of course is sometimes a little different – for one simple reason – the author may lack the skills, but he sure as hell cares and invests deeply. I’m sure we’ve all seen books where the art director put in a redhaired freckleface instead of a dark-skinned dark-haired hero, put a romance cover on horror, or a horror cover on fantasy — didn’t read the book, and didn’t care. Of course, cover art doesn’t HAVE to be accurate. Really. It’s going to irritate the author, the hardcore fans — but if the arwork was good enough to get you to pick up the book and read the blurb… it was great artwork. Well, unless the artwork suggested horror, and the blurb is slushy romance.
Anyway, you can imagine what relief a cover that the author believes will get the right sort of readers to have look is to me.