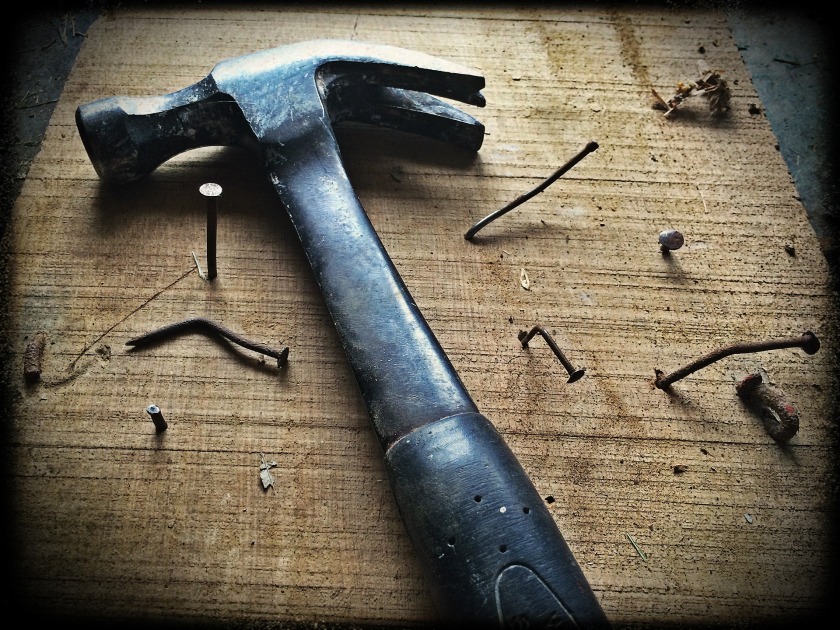 Reality is billions bits of apparent junk-data, much of which has little demonstrable impact on anything else. Maybe to God it all makes sense, fits into a predictable pattern. But realistically to the rest of us, 99.99999% of the data inputs we’re getting don’t even register, let alone form a predictive path. Out of my window I can a see at least fifty butterflies flapping around a flowering tree. The type of tree, the wind speed and the scent and color they perceive the flowers to be (almost certainly not the white I see) mean a great deal to the butterflies. One flap of one the butterfly wings may well have vast effects in chaos theory, but it isn’t apparent to me.

Humans see patterns (as in join the dots, or seeing A means you will find B, if C is true – the more variables and assessment of probability the better the pattern-recognition is). It’s a major survival tool, improving your chances and, evolutionarily speaking, the course we’ve followed as a species to be the fittest that DO survive. (I mean, there are a number of possible courses. Be like a tardigrade ( look them up. Seriously, you need to know this, especially if you write sf). Or a virus. Or breed like mussel (90% gonad – despite appearances there are no humans or even mammals that can really compete on this))

Pattern recognition isn’t of course limited to humans – anything but. But we also apply cognitive processing of a very high order to it (compared, for instance to mussels – at least most of us do, most of the time, although you’d not think it when we let the gonads take over – at maybe quarter of a percent of our body-weight. Imagine what men would be like if they had the same percentage as mussels). That pattern recognition behavior has us trying to apply it to everything in all cases – even ones where in fact, no humanly discerned pattern exists. We search relentlessly for those patterns, change our ‘filters’ and even invent patterns – because as a species we’re the end product of millennia of selection for looking for patterns that allow us to predict outcomes, whether that outcome is finding dinner or avoiding being it.

So what does this have to with Chekhov or his firearms? Or writing for that matter? (there has to be a pattern somewhere in all this, right?) Well, maybe not. ‘Chekhov’s gun’ refer’s that if a writer describes the gun in scene one, before the end it will be used. There are no extraneous things in the story – everything is there because it has a function in the story (is part of the pattern, to put it another way).

Now, there are those that say this makes for colorless and predictable stories. Hemingway apparently thought the idea worth of mockery and liked putting inconsequential details in his stories. The question of course arises: when is a detail inconsequential to the reader making the pattern of the story? When it is telling you something about the character, or their background? Then it is plainly not inconsequential, because it adds to the pattern.

I suppose it is an inconsequential detail which adds nothing (he bought a Greenberg tomato and and a few slices of Mondrini pepperoni, and bottle of Limosala anchovies ) – which as I just made up the tomato, anchovy and pepperoni type actually only convey the fact I can make brand-names and be unnecessarily verbose. An author I know slightly was looking for suggestions for a ringtone for her character’s phone. Now, it is possible that the author could convey legions of information about her character with this sort of detail, if arb people on the internet make suggestions, not knowing the character or much about what is be conveyed by this information – it’s probably inconsequential. Not guaranteed of course, because the author could still adjust the character around that.

But does it MATTER to the writer? Or, rather, does it matter to the reader? Patterns, remember. Readers are looking for them. Yes, we’re able to filter, and to find patterns and implications in things that probably have none… but yes, the reader wants to find ‘pattern’ – hence even by Hemingway’s admission finding symbolism and significance in these details (the author may well have put those in without meaning to – they were just adding wordage, and for example, trying to sound worldly or posh or poor or whatever). It’s not wrong, but like most things, including anchovies (Limosala or not) too much can ruin a good story. Too little MAY make it predictable and colorless… but once again that may depend on the complexity of the story. After all, it may be that there are hundreds or thousands of details which ARE consequential.

I tend toward the Chekhov side of the equation, because I believe people like having those patterns – which in turn produces several patterns 1) I recall some of my peers moaning about editors shortening their manuscripts… I was gobsmacked. Mine always grow. 2)Perhaps my books are predictable, but it is not a complaint I’ve had. I strive for the classic hallmark of a good murder-mystery. WHEN the denouement arrives, it seems obvious and natural – but you had all the clues and still didn’t see it coming too far off, if at all. 3)Because there is actually a fair amount of detail used in foreshadowing and shaping the characters and story, and I am a monkey of very small brain… It can be really exhausting. Just making up shit of no consequence to the story is much easier. 🙂

Now on another subject: I tried to reactivate my mailing list that elderly win 7 computer would not let me access. I now have laptop with win 10… and MailCimp has eaten it. So I’ve had to start again, with Mailerlite. I’ll be updating my site as well, which I also could not access. The link is here https://www.davefreer.com/ if you’re interested.